Did you know:  15% of the male adult population in the world have been circumcised.   76% of circumcised men are unhappy with their circumcision.   Viafin-Atlas survey 2019-2023

Circumcised Men and the SenSlip Foreskin 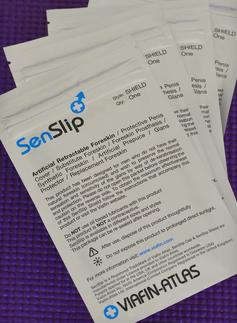 We are running an Anonymous Public Poll at our 'Survey' Page.

Your opinion and vote would be gratefully received.

Since 2005 we have sold over 140,000 SenSlip* products to every corner of the world.  About 15% of our customers are from females who have purchased the product on behalf of their partners.

If you need to contact us regarding the SenSlip* please feel free to do so.

The SenSlip* is not a Sex Toy.  Your Man puts it on in the morning and takes it off at night, just like his shirt.  (some wear them at night too !)  The SenSlip* Foreskin is not to be inserted into any part of the body.

The SenSlip* product contains natural rubber latex which may cause allergic reactions.  Safe use of this product by or on latex - sensitive individuals has not been established.

The foreskin has over 20,000 sexually receptive nerve endings.  It is roughly 72 square centimetres or 12 Square inches in area.  It is the perfect natural cover for the glans.

Welcome To The Ladies Page ....

The man in your life may have many worries.  As he gets older, the more his body will concern him.  Reassurance is always a good thing but one area where reassurance may not be enough, is his Penis

Your man may have many questions and self doubts. Some may be real but probably most are in his mind.....if he is circumcised then he may suffering from a lack of sensitivity in the glans or head of his penis.  Sadly, this is one area which is guaranteed to get worse with age.  Years of wear and tear and rubbing of clothing against his glans will have undoubtedly toughened the skin membrane of the glans.  His circumcision alone took away around 20,000 sexually sensitive nerve endings along with the best protective cover that he was born with  - his foreskin.

He is likely to be receiving less stimulation during sexual activity than an un-circumcised or un-cut man.  The latest findings stated in  The British Journal of Urology (International) have shown that the penis with a foreskin is around four times more sensitive than a circumcised penis.  In the adult male, an un-circumcised penis has around twelve square inches of nerve rich tissue ( about 72 square centimetres).  Studies have shown that this skin has about as many nerve endings as all ten fingertips.

Most ladies claim that part of their sexual desire is to know that their partner is receiving the maximum pleasure during any sexual activity.   Since 2005 the SenSlip*Artificial Foreskin has brought back much of the sensitivity that has been lost through circumcision.. When worn on a daily basis, the SenSlip* is a very comfortable substitute foreskin which allows the glans to go through a process of de-keratinisation (or thinning of the skin membrane).  The mucous membrane of the un-circumcised glans is around fifteen times thinner than that of a circumcised man in his middle years.  The sensitivity of the un-circumcised man is highly sensitive to touch and feel.  The SenSlip* foreskin can bring back some of that sensitivity in a relatively short time...just a few weeks.

Can your circumcised man wear boxer shorts ?  If he can without discomfort, his glans is likely to be de-sensitized.  A lot of circumcised men are unable to wear boxer shorts for this reason.  Wearing the SenSlip* daily, other underwear made from any material is no longer a problem.  The SenSlip* protects the most sensitive part of his Penis caused by friction from just moving around.  Just think of how many women get 'Joggers Nipple'  caused by the movement of their breasts against their clothing.  Now, imagine that extra movement all day long with the extra movement of your man's Penis...Oooh !